Digital Art was on the MA Fine Art Digital course reading list and so even though it’s eleven years old I thought I would see what the view around digital art was back then. This might also put the Digital Revolution exhibition [link and reference] and book into some sort of historical context for me.

The 1990s is the book’s reference period – digital revolution where digital tech became ubiquitous but some commonalities can be seen with analogue art that preceded it. For example, Duchamp’s Rotary Glass Plates and Moholy-Nagy’s Kinetic sculpture moving offer interactivity.

Computer artworks came as early as the 1960s eg Gaussian Quadadtric 1963 and since then there has been as expansion of and acceleration in digital art (making, selling, consuming)

The books explored digital tech in terms of artistic tools, mediums and themes.

New wave of animation though software such as Flash and Director 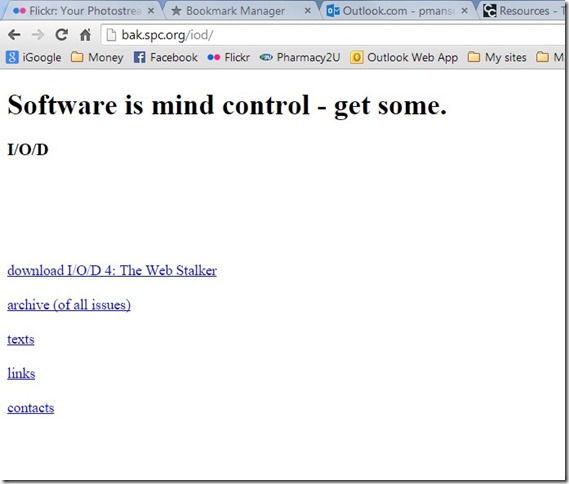 At the centre of the book is a description of the key digital themes. Here they are:

These themes have a special place in the lives of disabled people as while they expand all of our abilities they offer ways of interacting and articulating that enable new forms of engagement and new communities to develop as well as new forms of art.

Thoughts
One of the strengths with this book was the numerous artists mentioned, most of whom I had not heard of or seen any work before (and so the book triggered lots of time spent viewing some of these works and the artists) and the sense of incremental development in digital art with the various different directions tracked. Accordingly the book offered a very different type of experience to that of Digital Revolution.

One really interesting part of the book was under the rather boring title of Digital Technologies as a Medium where some of the art shown was more than interactive one approach (adopted by Olia Lialina) gave me a great deal of inspiration. For example, one mechanism for generating disability awareness would be to use mouse clicks on a browser to take people to disability statements in regard of the image…. I will need to think about this but the idea has potential. But the idea of using mouse clicks to take people where I want them to go rather than where they want to go it interesting.

The last part of the book got me thinking about the virtual and the real and the relationship between the two. Many people have both an online presence and series of identities as well as their physical one. For example, I have my blog, Facebook, LinkedIn as well as all the subscriptions that could be used to define me by my data trails. But I like to offer some consistency between these sites and so use similar avatars and wallpapers.

Reading the book did make me think about the digital in self-representation some more though and so I created this selfie as a way of making the digital nature of the image explicit.

The book also made me reflect on my own digital journey which began in 1988.

Since 2013 the main development has been increased interest access speeds. But this year has also seen big changes in the home TV market. Amazon Prime, Netflix, and BT have all taken away some of the power of Sky TV. So I have not seen Breaking Bad, some major Premier league football matches or Ripper Street because these have been shown on other TV platforms.

So when my Sky contract is up in June let’s see where the merged media will take my money as the power of digital technology fragments and re-energises traditional media.

South Londoner struggling with life, art and photography.
View all posts by Pete →
This entry was posted in Research and tagged analysis, code, digital, disability, image, Research. Bookmark the permalink.

For Street Art Around London London