Just like buses, after going to the Lumiere festival in Kings Cross – see here – another light Festival comes along directly afterwards. This time we went to the Winter Light Festival at Canary Wharf – see here for details. The fact that I’ve seen two light festivals so close together made for some interesting comparisons. For example, the settings the events took place in and the approaches both sets of organisers took, along with the choices of exhibits gave rise to the following thoughts.

Settings
While Kings Cross has a canal and the CSM’s Granary Square building it can’t match the standard unnatural light spectacle Carnary Wharf offers without any special installations. Take these images below as an example of what I mean. 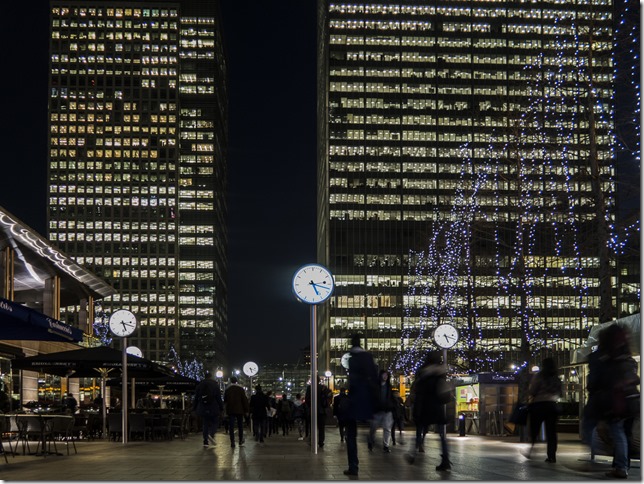 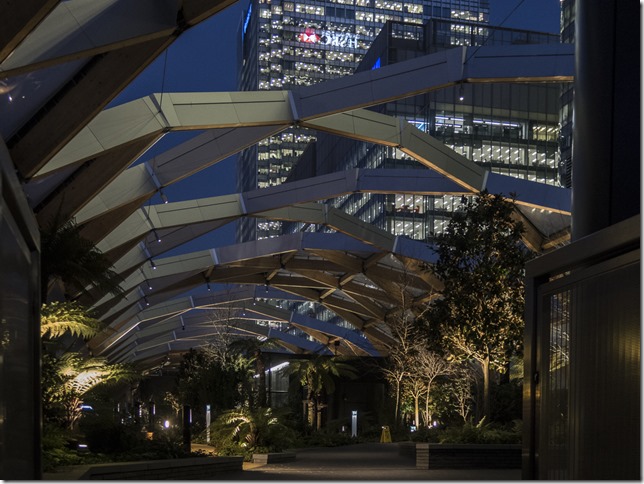 Of course while this vista suggests Canary Wharf has large public spaces the reality is that it’s all owned privately and so people have to abide by owners’ rules (as distinct from locally elected government by-laws and rules).

The approaches Lumiere and Canary Wharf took to showing the lights were quite different. Lumiere began at 6.30 – two hours after sunset – while Canary Wharf’s event began at 4.30. This, in conjunction with the locations, meant that there were not a lot of crowds at Canary Wharf and moving around was quite easy whereas Lumiere’s event was too crowded – so much so it was dangerous at times. Such practical issues have a profound effect on the viewing experience. I wonder whether and how the numbers and flow of visitors to the Camberwell Graduate show are considered?

Exhibits
Then there are the exhibits.  The Lumiere ones were variable as were the ones at Canary Wharf.

Some at Docklands were okay, but not thought provoking unless you read the blurb such as this exhibit entitled My light is your light and is about the plight of Syrian refugees.

Others, such as Aura below, were interactive and used both sound and vision.

But the best installation was this below. It’s entitled Bit.Fall created by Julius Popp (see more of his work here) where he has used live newsfeeds to create a waterfall of words from droplets of water. See two photos of it below. 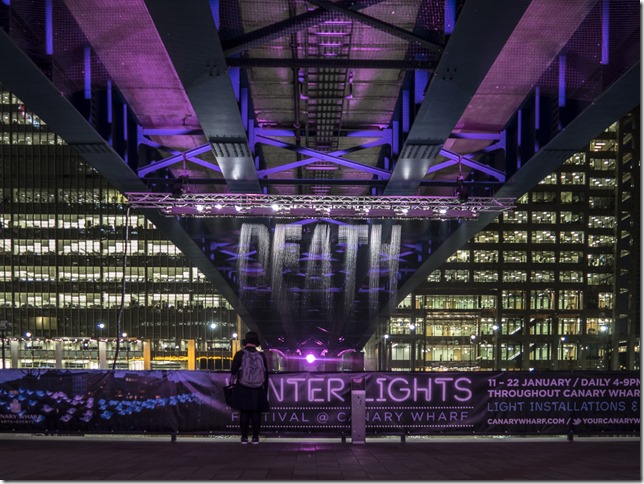 Single words are at once seen and then gone, falling into the water of Middle Dock.

It seemed to me that this exhibit offered me both spectacle and discourse and so offered beauty and depth in a way that some of the others did not. Accordingly, I came away from the winter light festival more enriched than with Lumiere. However London’s cold January nights benefited from both of them and gave my camera eye a little workout.