I will just remind readers of my aims and objectives.

Aim 1: Explore how to evoke specific understanding of disability as distinct from, but inclusive of, disabled people and impairment;

Aim 2: Experiment and develop my own visual artistic practices and repertoire in relation to the subject.

Objectives: In order to achieve the above I will need to meet the following objectives.

So how does Paralysis Unseen: Pictures achieve this?

Rather I have concentrated on things I associate with my experience of paralysis and tried to invest the images with connotations through 1) symbolism 2) context and 3) associations whereby the viewer will come to their own views about the meaning and discourse I offer. So this post is about my intention and the outcome of the work.

There are two books: one 12 by 12 and the other 7 x 7 inches. Accordingly there are slight differences between the two to take account of the change in scale. 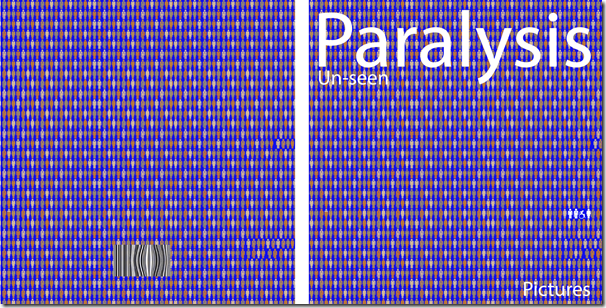 These rather sparsely worded sections are all designed to alert the reader to the nature of the book and orientate them to what they are about to see without contaminating their perceptions with lots of explanations.

The chapter headings and imagery are all designed to offer a sense of liner narrative and consistency by moving from the wholly abstract through the symbolic to the unrecognisable and then finishing on the particular. The symbolism used also seeks to raise questions in the viewers mind about perspectives and meanings, but is designed to support rather than dominate the main image selections that promote my discourse.

The large book has page numbers included in the table of contents but the small one does not as they just looked too busy.

This section does two things: it recognises the role of the body in disability, and it questions the validity of the camera as an objective means of representation by offering viewers two clear views of my torso that offer very different representations of it. They are both images of my body as the same tattoo is visible. But in one I am fat and the other lean. This is because I am paralysed from the sixth thoracic vertebrae down and so have no control over my stomach muscles. Accordingly I exhibit when sitting what is commonly referred to in Spinal Cord Injury circles as “tetra belly”.

While I have always been clear about what I wanted to represent in this section, how I did so has been very difficult. Somehow because I had shown a week’s worth of Urine bags early on I sort of got mentally stuck with that format whereas the blood images – moving from realism through to abstraction was a triptych and so I failed up until the last to find a suitable format to show them with some aesthetic consistency.

Then I realised that I didn’t need to show seven urine bags to indicate that urine colour is an important indicator of my health and so selected three. This allowed the section to work as one with two triptychs. However because the book doesn’t open so widely I placed the images carefully on the page to address that.

When I began on this section I envisaged it would be just made up of the grid and so offer people insights into the kit I use while all the time offering them very little idea of why and how its used and so undermining its documentary value. But as time went on and other work was carried out on projects I took this view further and juxtaposed it against an obviously subverting photo of legs bags on an incontinence sheet on the next page. This should challenge viewers ideas of documentary photography and make the point that documentary photos don’t explain and only show.

In terms of form I made the standard documentary grid large and consistent and then challenged and contrasted it over the page with the highly coloured lag bags on a black background.

M y H o m e
In this series the images I have tried to follow the sort of order that represents a day. So we start with a view from my bed showing the reflection of a portion of my wheelchair and trousers hanging close so I can reach them. Then the bathroom and its grab handle, then the stairs with a large blood testing strip and grab handle; then the view from my lift; then a view of me at my desk that just shows the wheelchair tyres; then looking at some things stored like the soft toilet seat; then a surreal dinner with stuff I use to manage incontinence; then shopping and a subtle symbol; then a piece of disabled art in the living room; then evening hinted at; then the bathroom; then bed; then the next night bag hanging amongst the ties.

The set is a mixture of formal and surreal but each image hints at different aspects of my needs, perspectives and functioning through the day.

M y S t r e e t
This diptych is my way of investing a standard landscape image with connotations of disability and evoking the viewer’s thoughts about access and neighbourliness.

I get on with my neighbours but can’t even get to knock on their doors let alone get inside because of the design of the front entrances. This the simplest way to show this was through symbolism and signage.

M y C o u n t r y
In this section I selected and ordered the images through a mixture of subject matter and form. The first image uses an traditional and obvious view of the establishment – a Guardsman – and undermines it through the replacing his regimental insignia with the disability symbol.

The next photo takes an urban theme with strong verticals and the wheelchair symbol buried within them while the fourth and fifth images invite viewers to look to see what the meaning is though the injection of symbols (one big one small).

The next two images continue the theme but if the viewer catches on to this they will be hard pressed to see the symbol in the left hand image of the seaside. But I will have driven them to think and look.

The next two images recognise we live in a social world. Then we move to an end with images of the capital where symbols are embedded.

This collage aims to assault the viewer both visually and in terms of thought. The repetition of ramps and feet in a variety of contexts aimed to evoke some sense of what it is to move around as a wheelchair user constantly looking for access and not moving physically at all.

This section offered an important transition from what is to what is felt.

In this section I move the viewer away from the real and into the realm of experienced; firstly with a hard chaotic image then to a softer quadratych and then to an even weaker softer triptych. The approach reflects my experience or reaction moving to chaos and anger to one of resignation and acceptance.

This collage shares real quotes from people struggling with their paralysis. We don’t often share such views widely because others either pull away from us or try to remedy the problem, or see this as some sort of quitting or failure. But others with SCI know the problems and can understand.  The choice of a door was to act as a simple metaphor to my world.

M y D r e a m s
I have spent a lot of time on the images in this section. They are images appropriated from the film Coming Home and at first I used a very high key approach to evoke a sense of dreaminess along with very saturated colours. In later versions I kept these values but ensured that clipping didn’t take place and the colours were harmonised. I also brought out the grid like values the images held from being taken from the TV.

I reduced the set to two because the third didn’t say anything more than the two. I also experimented a lot with their presentation and page placement to ensure a dynamic evocation.

Y o u r R u l e s
The two sets of images in this section where whittled down from a great number all of which offered variations on the same theme. The first image is a standard landscape save for the sign. The second image offered three views of the same space: one conventional, the centre image with adapted symbols and the third with none. Thus the aim is to evoke a sense of questioning why we need “special” places when disability can be designed out of the built environment.

I did give a lot of thought to the form of presentation and nearly offered the large landscape as the same smaller size as the triptych but then decided against that as I felt that by this point in the discourse people should be getting at what I am saying visually and be able to deal with the difference in form without it disrupting anything. The conceptual move from the convention landscape to the imaged one could be said with the triptych alone but seeks a leap of imagination from the viewer than is bridged by the preceding image.

Lastly I have offered viewers words as images and in essay form. This is a way of my keeping notation to a minimum and a juxtaposing the different positions the medical/traditional model of disability holds compared to the social model.

The form of the images is about offering viewers a full stop at three simple phrases used interchangeably.

Major change
As this project developed I had kept the words separate from the two photobooks but have finally decided against that for reasons of form and economics. In terms of form the two smaller books worked well as a pair but Paralysis Unseen Words sat oddly with the larger book. It just didn’t look right. In addition, the costs of printing three books was considerable.

Therefore I have incorporated the companion essay into the large and small book. I have placed it at the back of the book and have not given it a separate heading in the table of contents. Rather it just followings on from the section entitled Our Words.

The large book does not have an essay table of contents because it runs over so few pages. The small book does however as the essay runs to 13 pages in that scale.

The last page is a simple one that offers viewers an insight into my approach via the short statement and then invites them to engage with me via the companion website and my email.

Thoughts
The books contains 129 images over their pages and 93 printed words prior to the essay and three images that use words as their primary mode of communication. However the 93 words include the chapter headings being repeated in the table of contents. So however one analyses this book I think viewers will agree that its primary mode of communication is visual.

1 Response to Putting the books to bed (long post)