Nothing (save for process, colour, shape and texture)

I’ve been trying to keep myself occupied these past few days. Dad’s back at the rehab unit and appears as okay as he can be, and I am girding myself up for tomorrow’s operation. I spent some time phoning family to see how everyone is. My late mum’s last remaining sister who lives on the Isle of Man is just out of hospital, dad’s brother has cancer and is being treated for it; his daughter is coming to the end of her life through the same disease. This is life: the routine of small things that make up the day punctuated by the big events. It just seems as though I am at a stage in life where health and decline appear dominant. If I go back 25 years then everyone was having children…..

I think the timing of this MA has worked well as I feel like it is getting near my time to finish. But in the meantime I have distracted myself with this little project. 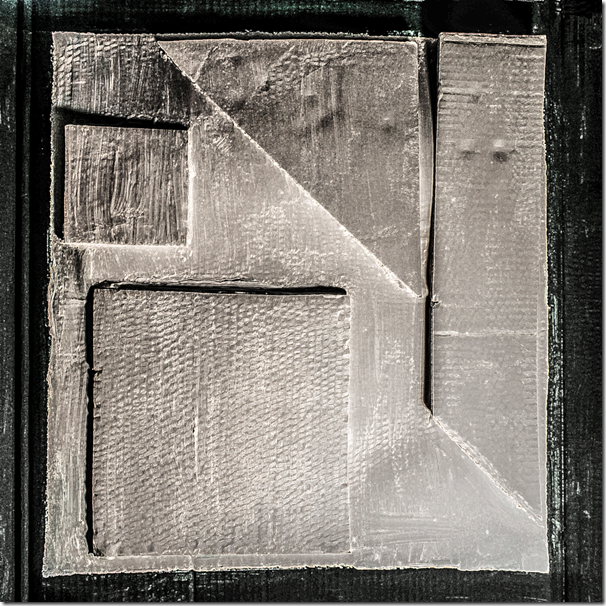 This image is the result of nothing save for killing some time. I took some different pieces of cardboard and cut them into simple geometric shapes and painted them. The outcome seems to me to be much more Josef Albers than Piet Mondrian or Magali Reus.

Hopefully the work’s evocation reflects some of how I feel. It is at one and the same time rubbish, and nothing other than simple shapes, textures and indentations.

While the materials used were those I had laying around: card board, emulsion and acrylic paint and, of course, lighting, the process was one driven by serendipity. First I painted a square on the cardboard. Then I cut another piece of cardboard into geometric shapes and was going to paint each piece a different colour at one point. But then when placing the unpainted pieces on the larger piece, I could see that a better option was to have the shapes emerge out of the base through their size and depth and so placed them in the way you see above and painted over them.

I didn’t use any glue – just the paint to hold them in place. At this point I was going to cut the white square out but as I looked at the shapes felt the whole thing would sit better in a larger frame and so just painted the rest of the board green (because that was the colour I had a lot of). 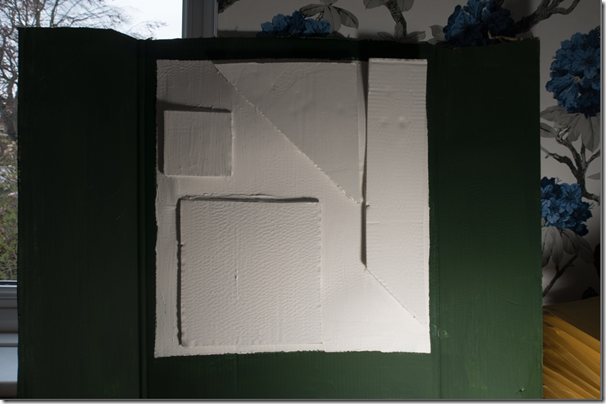 So the product looked like this immediately above. However that didn’t really work for me and so I decided to “improve” it digitally by using Lightroom and Photoshop and that gave rise to the photo at the top of the post.

Stage 2
Then, for no other reason, than to kill some time I painted over the white with red and then disputed the clean shapes with small blobs and strands of paint. 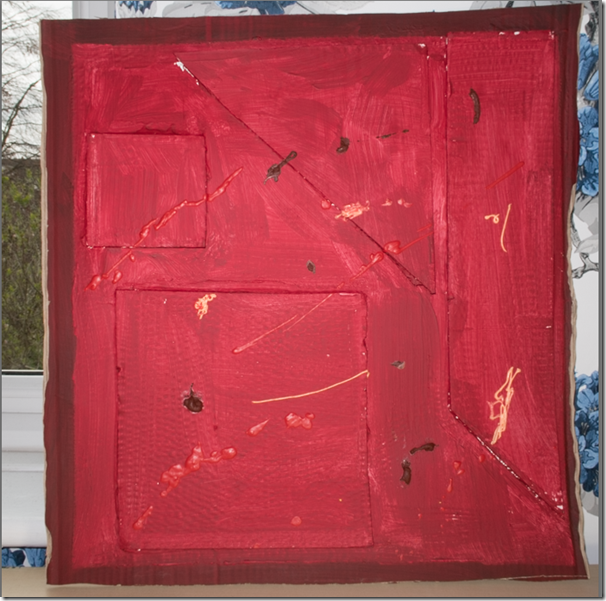 But this to me looks like rubbish as in no good. So I experimented with it digitally and came up with this below. 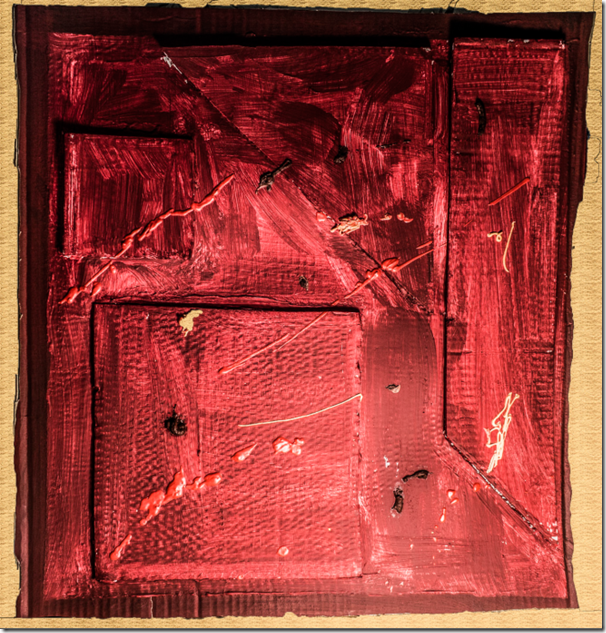 Thoughts
I like the digital evocation of both this and the earlier version because the lighting and digitisation enables me to emphasise features such as texture and volume. In a way this is a very different outcome to my recent physical pieces as this project looks much better digitally rendered whereas with the others the reverse was true.

Still, I’ve little time now. I begin to get up and 5am to be at the hospital for 8am…. eeek

2 Responses to Nothing (save for process, colour, shape and texture)